Bring your creative work depicting further understanding of labor history to this contest and stand a chance to be awarded prize money.

The Winner will receive a monetary prize of $1000 and the winning article will be promoted to further the understanding of the history of working people.

The winner of the Bernhardt Prize will be awarded up to $1000.

Criteria for entries for the contest include:

To enter the contest, forward an email before the deadline to info@laborarts.org with the following information: 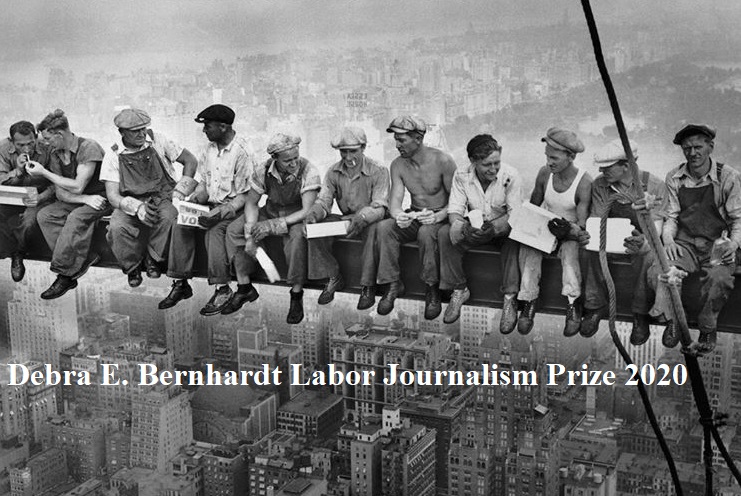 Dedicated to Bernhardt, and the online exhibit “Making History Personal” that explores her work, the contest is focused on documenting the undocumented history of workers.

The aim is to share the hidden histories of working people, unravel unrecognized contributions, and to make links between past and present.

All works being entered for the contest should be published in print or online between August 26, 2019 and August 30, 2020.

The winner will be announced at an online Forum on Labor Journalism on Tuesday, October 13, 2020, at 6 pm.

The prize will be granted to insightful work that

The Contest is coordinated by a committee that includes:

In order to inspire more great writing for a general audience about the history of work, workers, and their organizations, this contest award is sponsored by

The award is co-sponsored by

Jaeah Lee received the 2018-19 Award for “The Real Cost of Working in the House of Mouse,” Topic Magazine (online), September 2018.

She was a featured speaker at the 2019 Bernhardt Labor Journalism Forum on October 16, 2019.

Toni Gilpin received the 2017-18 Award for “A Louisville Union Built Its Strength as Blacks, Whites Took on International Harvester,” in Louisville Weekly, August 30, 2017.

She received the prize at the Bernhardt Labor Journalism Forum on October 16, 2018.

Garret Keizer was the 2016-17 Award winner for his article “Labor’s Schoolhouse – Lessons from the Paterson Silk Strike of 1913,” in Harper’s Magazine, July 2017.

The prize was awarded at the Third Annual Bernhardt Labor Journalism Forum on Thursday, October 12, 2017 at Tamiment Library.

The award was announced at a forum at NYU’s Tamiment Library on October 13, 2016.

David Kameras and Emily Harris were the 2014-2015 winners for their May, 2014 article in the United Mine Workers Journal:  “From Tragedy to Triumph – 100 Years Later, Workers Benefit from Ludlow’s Legacy.”

The presentation was held at NYU’s Tamiment Library.