Submit an application for the Zampolli Prize 2022, and be lucky enough to get up to £1000 and attend the SCA conference as a guest of honour.

The recipient will receive prize money of approximately 1000 GBP (one thousand GB pounds), or a round number of about the same value in the currency in which the prize is to be awarded.

The recipient will be a guest of honour of the SCA and the Local Organisers at the conference at which the award is made and the lecture given. This means that all travel, accommodation and subsistence costs of the award recipient will be paid by ADHO.

Nominations should consist of a document 1500-2000 words describing the work to be nominated and the individuals involved, paying special attention to the relevance and importance of this work to the field as a whole. Include a brief description of the work, a discussion of it’s innovative use of information technology and particularly the importance of this project to the Digital humanities.

Address nominations to the ADHO awards committee and send electronic copies to awards@adho.org.

About the Antonio Zampolli Prize 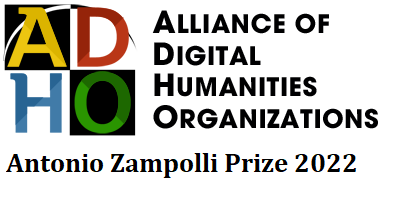 The Antonio Zampolli Prize is an award of the Alliance of Digital Humanities Organisations (ADHO). It is named in honour of the late Professor Antonio Zampolli (1937-2003), who was one of the founding members of the Association for Literary and Linguistic Computing (ALLC) in 1973, and ALLC President 1983-2003.

He was a major figure in the development of literary and linguistic computing from the 1960s, and an enthusiastic supporter of the joint international conferences of ALLC and the Association for Computers and the Humanities (ACH), which were initiated in 1989. He was also a prime mover in the Text Encoding Initiative, both in the initial 11-year project, and in the establishment of the TEI Consortium.

The Zampolli award is given to recognise a single outstanding output in the digital humanities by any scholar or scholars at any stage in their career. The output must involve the innovative use of information and communications technologies and may take the form of published research and/or the development of research-related tools or resources.

The award will be made on the basis of the output’s importance as a contribution to the digital humanities, taking into account the significance both of its use of information and communication technologies and of its actual or potential contribution to the advancement of humanities research. The award will be made every three years, alternating with other ADHO triennial awards, such as the Busa award. For the Zampolli award the output recognized in the award will normally have been published or otherwise made publicly available in the 7 years preceding the year of the award.

Deadline for application is September 1, 2021.

The recipient will be chosen by the ADHO Standing Committee on Awards. The SCA is responsible for establishing the procedures for deciding on the Award, including procedures for soliciting and receiving nominations, reviewing the nominees’ work, selecting the recipient, and writing a citation describing the achievement in recognition of which the award is given. The agreed procedures will be submitted in writing to the ADHO Steering Committee for formal approval, and to the executive committees of the ADHO Constituent Organisations for information. They will also be published on the ADHO website, and on the websites of the Constituent Organisations, should they so wish.

The award would be given at the annual international digital humanitarian conference.